Irina Shapiro has graced us with another audiobook that has left me wanting more. Narrated by Wendy Wolfson, I listened to The Unforgiven, book three in the Echoes From The Past series nonstop since downloading it. I really wish I could tell you all the gritty details, but if you haven’t paid attention and haven’t picked up this series yet, I’ll keep my review as spoiler free as I can. 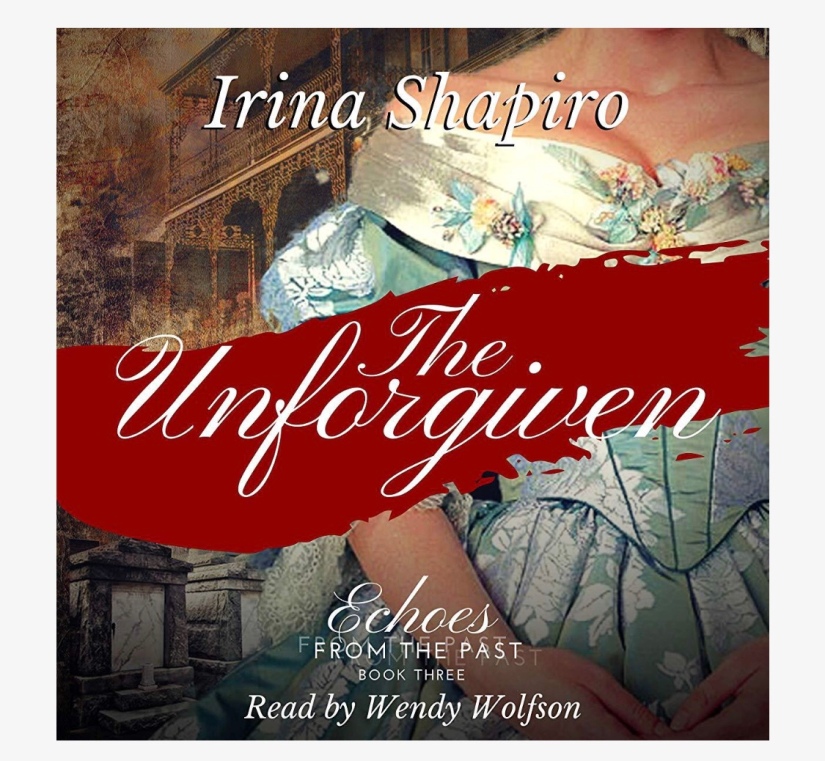 Quinn is back on the hunt for her father, and hopefully the truth about where her gift comes from. Her clues lead her to New Orleans, Louisiana and a family that seems to welcome her with open arms. What begins as a weekend away from Gabe turns into several weeks as a new story unfolds before her eyes.

Madeline is a monied young lady from Louisiana in 1858. She’s adored by her father, as an only child. But when he dies and the estate is sold to pay his debts, she’s sent to live at the Arabella Plantation with a grandmother she never knew and a cousin who welcomes her fully. While initially excited to learn more about the family her father never spoke of, she finds that he had been banished years before and her grandmother hates her in place of him. But no one will tell her what terrible sin he committed.

There’s no record of Madeline in the history books or in the family grave. Quinn longs to know more about the young woman and uses her gift to unravel a life cut short. But her own life is turned on it’s head, and as she comes to terms with her own heritage, she’ll find that alligators and voodoo are not the only dangers in Nola.

I think I’ve said this every time I review this book…it deserves to be a TV series. The time hopping adventure Shapiro creates are completely enthralling and deserves a wider platform. I’ve become emotionally involved in these characters, something that usually wears off after a few books. But these have such backstories that I have to know more!

There was a small teaser in the books end that gave me hope that the series will never end. I could red about, and listen to, Quinn’s adventures forever. Each story is so different and compelling, one could never get bored of her glimpses into the past. The fact that her personal life is full of wild twists and turns doesn’t hurt anything either!

I highly, highly, highly recommend this book series too all book lovers, but especially those who love some mystery and history in their reads. 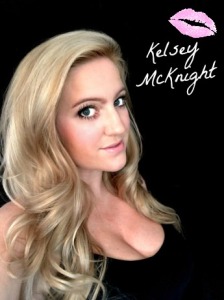 Looking for a book that will make you laugh just as much as it’ll make you blush? Check out Chasing the Bodyguard by Grace Risata. 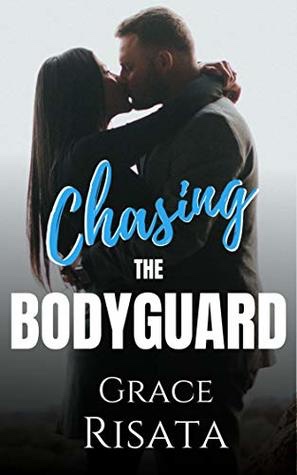 Leandra is a woman in a man’s world. As as the boss of an Irish mob syndicate, she’s learned how let her bark be just as deadly as her bite and she rules with an iron fist. But even she needs a little backup, so she hires Sam as her bodyguard. He’s up for the challenge of keeping her safe, but she’s a firecracker that doesn’t take kindly to being told what to do. He’s a cockblocker, a rule maker, and it drives her crazy that she can’t have him.

Sam has a job to do and won’t let his attraction to his boss mess things up. But he also has a few secrets under his belt that refuse to be hidden, even though he just wants to move on. A deadly game begins, and the urge to give in to Leandra becomes stronger than ever.

Risata has this ability to really build a world, set up the heat, and give you all the romance without having to fluff things out. The tension between Sam and “Lee” is so thick, you could cut it with a knife, not that you’d want to. The back and forth is what makes it a great read. I find that banter really makes or breaks a book for me, and This author never disappoints.

Are you sick of cliffhangers? This book has zero, just a small tidbit of a book yet to come. But there are no shortages of happily ever after on the Grace Risata Amazon page, even if some are a little unorthodox. It’s also fun to have the woman be the powerful one calling all the shots instead of a man. So if you like dirty jokes, steamy scenes, and some humor that will make you laugh and blush at the same time, one click Chasing the Bodyguard now. 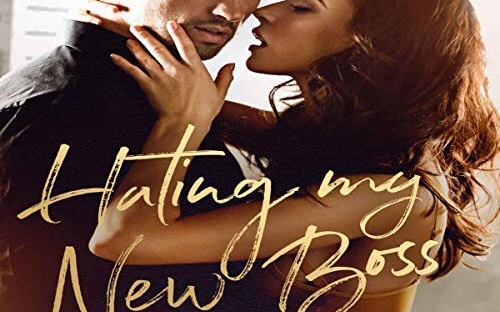 It’s no secret I love audiobooks, so I’m always thrilled when the talented Meghan Kelly lends her voice to a new book. Today, I want to introduce you to Hating My New Boss by B.B. Hamel. It’s a fiery hot story of old wounds and second chances that you might want to listen to with headphones instead of your speakers…unless you have particularly relaxed neighbors. 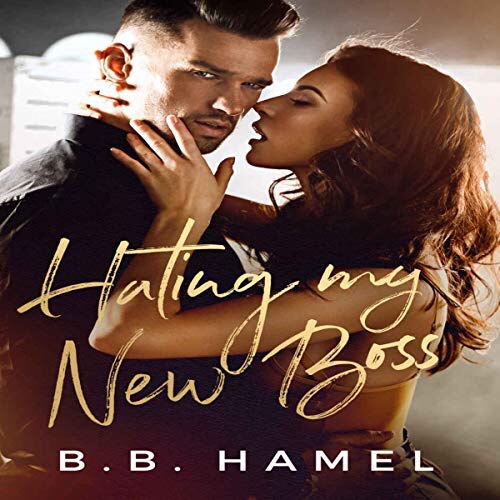 Remi has fought tooth and nail to be the next in line to take over as the new Creative Director at an ad agency. But instead of moving into a new office, she gets a new boss, and he’s the last person she ever wanted to see. A war between two families forced her and her former best friend Justin apart and he poured salt in the wound on his way out of her life. Yet he got the job she wanted and her hate flows more freely than ever before.

Justin only got the job because his big shot dad put his two cents in, but being the boss is always fun, especially when you get to be in control of someone from your past. It’s no secret Remi despises him, but he strikes a deal to bring her to his side. And as they work together to woo a major client, it’ll take more than a raise and some creative control to get her to listen…especially when the line between business and pleasure becomes seriously blurred.

As always, Kelly has given life to a cast of varied characters without making them sound like cartoons. There’s the dippy client with her far out tone, Remi’s firm voice that often shows her hidden weakness, and Justine’s sultry baritone. As you listen, it’s very easy to stay on track with who is who without having to rewind. I think that’s what makes Kelly successful in her field. She toes the fine line between giving each character a distinct sound and making them each a caricature, and she does it beautifully.

And then there’s the thing where the last Kelly audiobook I listened to was a sweet, Christian romance that took place on a ranch. It’s wild how she can go from sweet to spicy without a hitch. That’s real talent.

Outside that, it was a great plot then went seamlessly from the big city to underground Hawaii without a beat. The history behind Justin and Remi’s relationship is deep and complicated. It couldn’t be washed away with just an apology and more than one conversation had to happen before the pair could even begin to settle thing between them. I liked Remi at once and wanted to kick Justin right out of that office. But when you get to know Justin, you’ll see that under the protective layer he’s been forced to take, he might just surprise you.

If you’re into audiobooks with enough steam to put a sauna to shame and some characters to really sink your teeth into, download your copy of Hating My New Boss now.